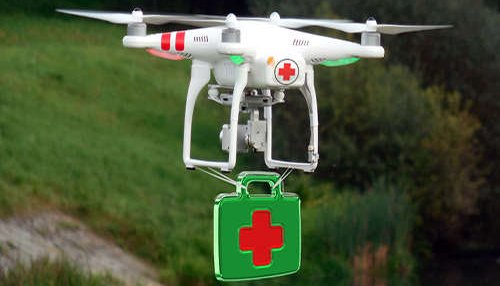 Medical drones are not commonplace in the healthcare industry, but we can expect to see their widespread use in years to come. Medical drones are one type of drone, but like other drones the possibility for healthcare entrepreneurs to turn these medical drones into a business is ripe if they can stay within the confines of applicable laws. In fact, the government is drafting various laws to protect the rights of individuals who are weary of their use.

Drones or Unmanned Aerial Vehicles (UAVs) can track emergency mobile communications and use its GPS to navigate to the location where the incident is occurring. Drone pilots can (1) observe via an integrated camera; (2) communicate; and (3)provide medical support to victims and/or those who are rendering aid to the victim. Medical drones may be equipped with certain life-sustaining instruments, and medical supplies attached to it in a “medical toolkit”. These medical drone toolkits can be dispatched to remote ski-locations to aid down skiers, off-shore oil rigs, trapped miners, or an island that is difficult to reach by boat. The goal is to stabilize victims until more advanced medical personnel and support arrives to transition the patient to a hospital.

From an ecomonic standpoint, operating Medical drones can be far more cost effective that other means of delivering medical care that is currently in use. Additionally, the speed with which medical care may be provided to a patient will increase because Medical drones aren’t limited by pedestrian or automobile traffic, bodies of water or other man-made or natural formations, such as Mountains. However, navigating the drone by GPS may be problematic because of the inability to detect these formations.

Currently, the main shortcoming with Medical drones is the type of payload that it is permitted to carry. Due to existing federal and state laws, drones won’t be able to carry prescription drugs for the foreseeable future. That is reasonable given the fact that if a drone carrying prescription drugs (i.e. Medical marijuana, oxycotin, Percocet, etc.) falls – no pun intended – into the wrong hands then the results can be catastrophic to the intended recipient’s health and the unintended beneficiary’s health. For now, medical drones will most likely be limited to carrying a payload with only over-the-counter medical supplies and some durable medical equipment, such as gauze, cold medicine, splints, neck collars, etc. As security safeguards advance for the payloads that are carried by medical drones I expect to see the types of supplies that they carry to expand to include prescription drugs, assuming that amendments to existing healthcare laws are made, which would permit this type of activity.

The FAA requires a special permit to fly a drone for commercial purposes. Anyone wishing to operate a drone for purposes other than recreational purposes must obtain a grant of exemption issued under Section 333. Medical drone operators should obtain one of these Section 333 exemptions so that they can lease their drones out to companies or hospitals that cannot operate their own until they obtain their own Section 333 exemption. The company would have to apply for and obtain a Certificate of Waiver or Authorization (“COA”) to fly in a particular block of airspace.

An online registration system has been created for drones. Every operator with a drone that weighs more than half a pound up to 55 pounds (including any payload) must register their drone with the FAA, pay a $5 fee and affix a tail number to the drone. Registration must be renewed every three years. When registering online, each owner must provide his name, address, and email address. Only after proper registration will an owner receive a Certificate of Aircraft Registration/Proof of Ownership that will generate a unique identifier for the registered drone owner. The FAA prohibits all drones from flying higher than 400 feet or within 5 miles of an airport.

These prohibitions appear to keep medical drones grounded before they’ve even had a chance to take off, but these prohibitions are seen by many an attempt by the government to promote safety and responsibility. For example, registration numbers can be input into a national registry so that in the event of a collision, authorities can trace the wreckage back to the operator. It is likely that the FAA will carve out exceptions for drones used for commercial purposes, such as medical drones.

There’s still a long way to go before medical drones become commonplace, but if you get into the business early you stand to make huge profits.